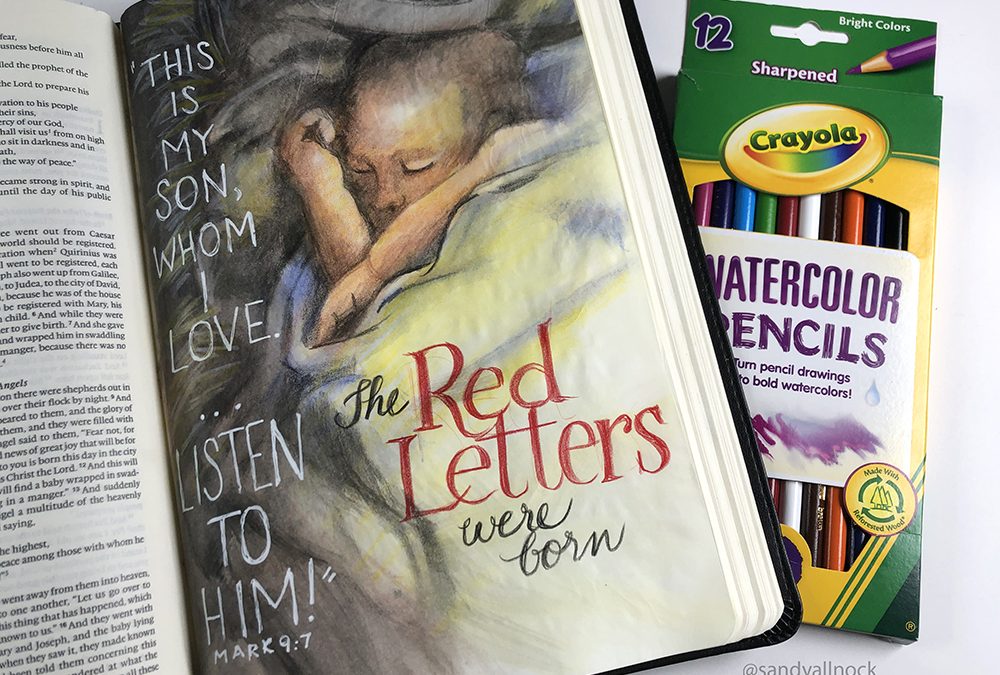 Music can be a huge inspiration for your creativity – often the creative language used in lyrics is poetic, unexpected, and can put together ideas in new and fresh ways that hadn’t before crossed your mind!

I recently saw Crowder’s Red Letters video and just couldn’t get it out of my head. The lyrics, the visuals, the strong beat – they all just kept coming back into my thoughts!

As Christmas was nearing, I thought about those red letters – the words spoken by Jesus in the Bible – and that there weren’t any before He was born. No direct quotes from Him! So in addition to Jesus being born, the red letter period of our history also was kicked off.

I also used inexpensive Crayola watercolor pencils for this page; a member of our Facebook group had asked about them, as she’s leading an event and wanted to send everyone home with a pack of pencils – she could have chosen regular Crayola pencils, but I love that she wanted to give them something that can be used in a few ways! Smart thinking! She wasn’t sure if they bled through or not, and I found they don’t, so hooray! I tested them out on this page with the baby Jesus – and found I did have to keep adding layer after layer of pencil (letting it dry in between) to build up rich color, which is easier to do with other brands – but it worked.

One other thing to note about this page is that I hadn’t planned on adding the verse from Mark at first. I wanted the simplicity of the red letters. But….then I realized that non believers or new believers who see it might be confused. Red letters weren’t born. And I don’t know that God chose to “give” us red text to call out the words of Jesus – sure it’s a great idea, if your Bible has that, but….I thought that text alone could indicate something I didn’t intend by the text.

But the verse from Mark 9 came into my mind – that tells the reason that the red text is used in the Bible. We’re to listen to Jesus. To pay special attention to what He says – the rest of the Bible is true, but the words spoken by Jesus deserve to be called out to us to hear them … and to follow.

So don’t be afraid to add a related verse when journaling. Someday your great grandkids may hold your Bible in their hands, and if you’re not there to explain what you meant by something, and you had a wild hair like I often get in my journaling, another verse or some journaling with an explanation might help a lot!