Making Big Decisions: When to Get Out of the Boat 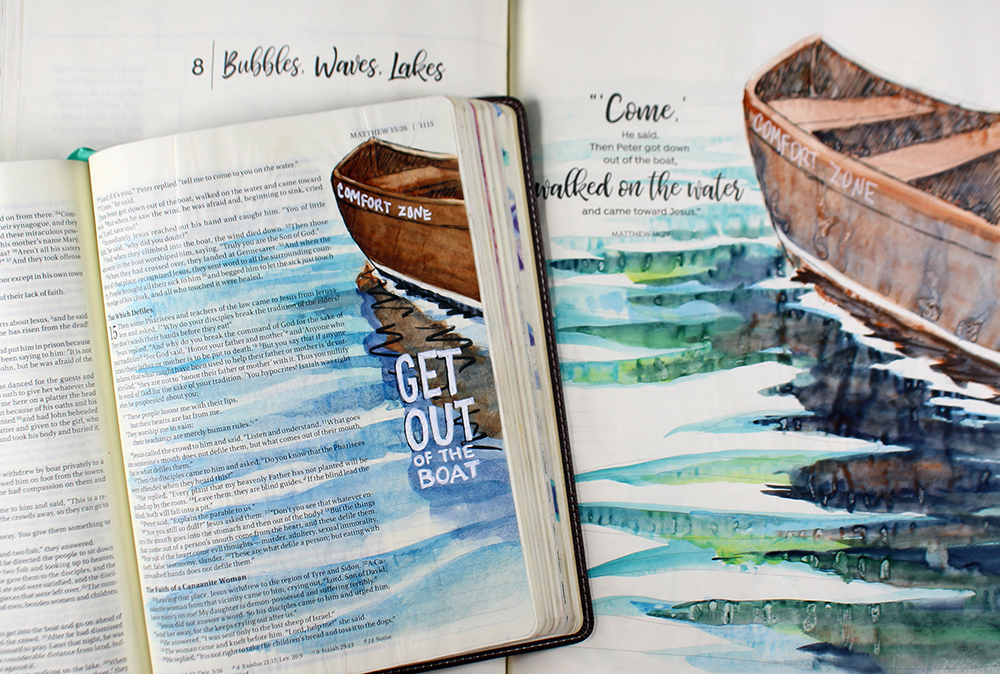 It’s not often a clear “yes” or “no.” The details or outcomes or consequences aren’t known. You may be happily suprised – or totally blindsided and things could go wrong. Big life-changing decisions like moving, having a child, who to marry – or small ones, like whether or not to help with children’s ministry this year, or whether or not to go talk to someone about Jesus.

My beloved former pastor used to talk about “turning on the radar” so the voice of God could be heard….spending lots of time reading His Word and praying so that His still small voice became familiar and recognizable, and being obedient in things you know He DID say to do so that your “radar” is tuned to hear well.

But our flesh – and our enemy – will try to confuse us, especially when it comes to kingdom-impacting decisions. At least I’ve found that. Sometimes I can clear my head enough to recognize that’s what’s happening…and other times I get lost in the muddle of my thoughts!

In Bible Journaling Made Simple I included a little bit about the page shown in my Bible – and I thought I’d share a little more of the story:

In the summer of 2013, I was sitting at my desk, not thinking a thing…when I heard, audibly, “It’s time.” I knew in a second exactly what it was about.

It was God answering a 10-year ongoing prayer request to be released from my job. I had sought other positions for years, and nothing had come through My pastor had counseled me to stay until God gave me a new assignment; sometimes He just needs us to be obedient and find joy in where He’s placed us, so we can learn and be ready for the next assignment. (I had become far too grumbly, and this was hard advice!)

But this was a big decision. I had nothing new to go to. He didn’t give me an assignment; He only released me from the current one! What to do, what to do….no job to go to, though I had saved enough to live on for a while….do I leap and then wait to see what He’s up to? Was that really Him? Or was it the pizza I had for lunch?

I asked for confirmation – actually for repeated confirmations. If I were to jump off a cliff, I needed to be certain that was His voice. I asked for three confirmations not prompted by me in addition to that word, including one directly from Scripture. I said nothing to anyone about what I had heard that day, and just prayed.

When I got home that day, I found a friend had uploaded a video. It showed the average life counted out in jellybeans, asking me the question, how will you spend the rest of your days? Was that a confirmation? He’s not a Christian, would God use someone like him to speak to me?

I then had a conversation with a friend who, unprompted, directed the conversation to the fact we were in our middle years, and asked if I had thought about what I wanted to be when I grew up – would I remain in my line of work until retirement? She was reconsidering hers. I didn’t share with her what God had spoken, I just listened. She didn’t make this a spiritual conversation, she just wanted to talk about going back to college. Despite my inner prayer, she didn’t quote the Bible with a verse perfect for ME so that I could know God had sent her. I wasn’t sure, was the raising of the topic a confirmation?

I attended church that weekend, hoping that I’d sit down and read the sermon notes and find it was going to be all about me and my decision. This was God’s big chance. And…..nope! The sermon topic wasn’t remotely related to my situation. Whaaaaa? Hey God, this is your moment! You could have put this one to bed! My heart sank.

Worship began, and I turned my attention away from myself and onto the Lord and His sweet presence that day. Then… a short break in the music.

The worship leader, Jonathan, began to speak about something the Lord had told him. I honestly remember nothing of Jonathan’s story, because the verse he about knocked me over:

“Lord, if it’s you,” Peter replied, “tell me to come to You on the water.”
“Come,” He said.
Then Peter got down out of the boat, walked on the water and came toward Jesus.

While getting out of the boat is definitely an encouragement to step out in obedience, this verse has a very long history in my life. God has used Matthew 14 every time to confirm big decisions. When I moved from one state to another, accepted a new job, changed ministries, on and on – and He has been 100% right and proven that He’ll meet me on the other side every time.

I broke down into happy tears at the reading of that verse, knowing that I had actually heard the voice of God, audibly. It wasn’t my lunch speaking, or my own desires guiding my thoughts….it was Him. I could walk into the future resting on that moment.

It’s been over 6 years now, and God’s faithfulness has been borne out. He has given me the ability to run a business, write a book, serve in worldwide ministry sharing the truth of His Word. Any time I’ve doubted, I have been able to go back to that moment, sitting at my desk, hearing that voice — and I could know it was the Lord who set me on this path.

I’d had no vision for what this season would look like, and couldn’t have planned anything this wonderful and fulfilling. I don’t know what the coming years will look like either, but I know beyond any doubt that my Lord is worthy of all my trust to care for my needs. It’s going to be great.

Watch the painting of water in the Bible Journaling Made Simple workbook: 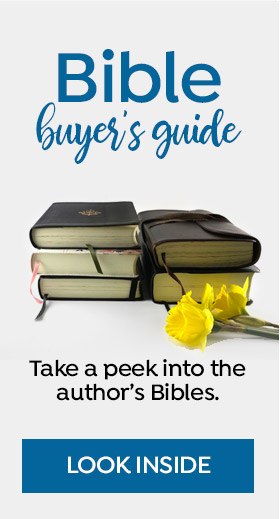